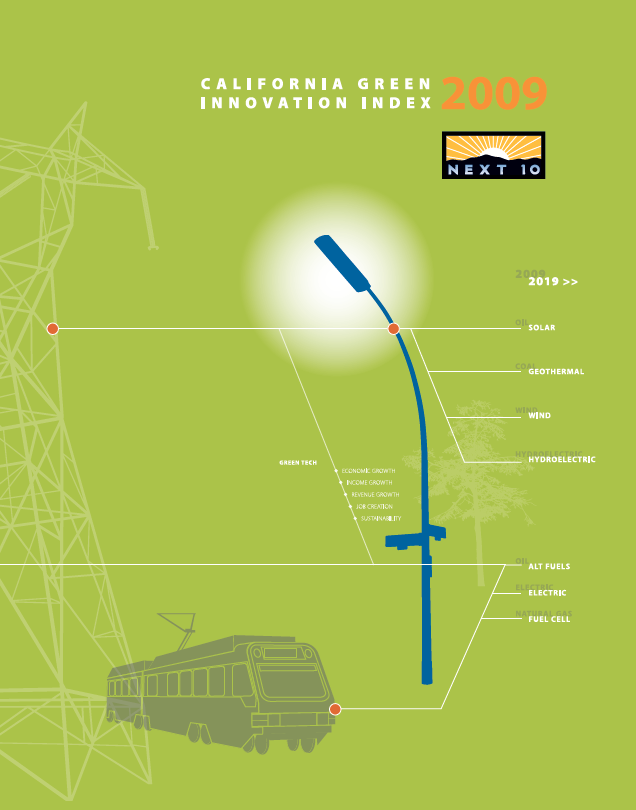 The 2009 California Green Innovation Index, produced by Next 10 and authored by Collaborative Economics, provides a deep analysis of key economic and environmental indicators that will help us better understand the role green innovation plays in reducing greenhouse gas emissions while strengthening the economy.

Research included in this Index provides further evidence of the powerful economic stimulus clean energy policy can provide. California’s energy productivity, that is, the amount of Gross Domestic Product produced per unit of energy, is 68 percent more productive than the rest of the nation. New data presented shows that while total jobs increased by just one percent statewide, green jobs have increased by ten percent since 2005.

Clean technology investment in California nearly doubled in 2008, reaching an all-time high of $3.3 billion and capturing 57 percent of the national total. Los Angeles, San Francisco, and Sacramento together accounted for over 20 percent of the nation's hybrid vehicle registrations in 2007. California is a national leader in solar, wind and battery patents.

Key findings of the Index include:

Though many of the 2009 Index findings confirm continued progress, major indices underscore the difficult challenges ahead: